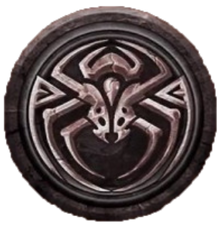 Zath is a type of religion in Conan Exiles. It can be learned in the following ways: selecting it as the main religion during character creation, spending 50 Feat points in the religion section, talking to Harpagus the Hatcher in Weaver's Hollow / Scuttler's Shortcut, or by finding the

Unlike other religions, Zath does not have a Feast of Zath item.

Zath's avatar is a giant spider.