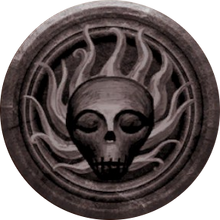 Yog is a type of religion in Conan Exiles. It can be learned in the following ways; selecting it as the main religion during character creation, spending 50 Feat points in the religion section, or by talking to Nunu the Cannibal at Shaman's Rise.

For the Yog Priest and Archpriest, see the Priest page.

Yog, also known as the Lord of Empty Abodes, is a beastly god worshipped primarily by the cannibal tribes of Darfar. Yog offers strength in battle and victory over their foes - in return the devotees of Yog are expected to engage in ritual cannibalism. Yog worshippers can expect to gain strength and vitality by consuming the flesh of human foes and his Avatar takes the form of a blasphemous, flying horror.