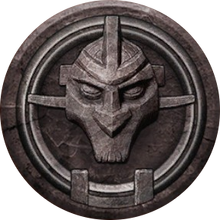 Ymir is a type of religion in Conan Exiles. It can be learned in the following ways: selecting it as the main religion during character creation, spending 50 Feat points in the religion section, talking to The Outcast at The Outcast Camp, or by finding the

For the Ymir Priest and Archpriest, see the Priest page.

Ymir is the lord of war and storms. Frost Giants are said to be the male children of Ymir, while his singular daughter, Atali, is said to haunt the battlefields of men, luring them to their death in the frozen wastes of the north. According to the Nordheimers, when a warrior falls in battle they go to Valhalla, the great feasting hall of Ymir, to dine and fight forever. When invoked, Ymir takes the form of a Frost Giant wielding an enormous axe and leaving a trail of frost in his wake.

1: Currently not implemented.
2: Crafted at Stove.

Ymir's avatar is a Frost Giant wielding an axe.