The Degenerate is the Boss of The Well of Skelos. He is the last surviving pure-blooded Serpentman. He appears as an average looking Serpent-man with a glowing staff sitting on a throne, behind a glowing, purple shield of magic.

When entering his chamber, he will hide behind a barrier and create numerous illusions that must be destroyed. This will go on for a while. However, creating the illusions depletes The Degenerate and eventually the barrier will fall and he will collapse to the floor dead.

As of February 5th, 2022, The Degenerate can bug out and simply disappear after the player defeats all of his shadows, not completing the Journey step Destroy whatever dwells at the heart of the Volcano. It is unknown if this bug can happen both in offline and online sessions. This can potentially be solved by exiting the area of the boss fight far enough for him to respawn and then heading back in. Caution is advised, as doing this will restart the boss fight from the beginning. 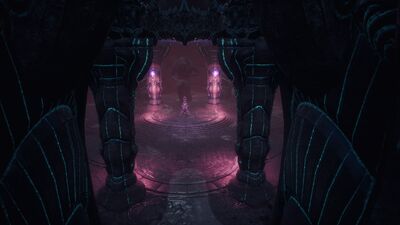 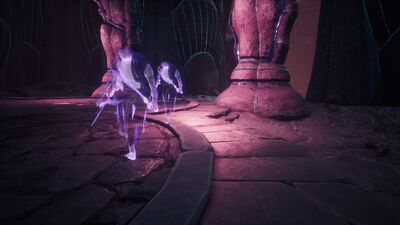