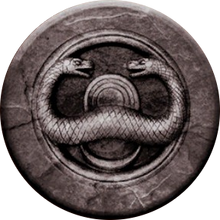 Set is a Chief Deity of Stygian and a type of religion in Conan Exiles. It can be learned in the following ways: selecting it as the main religion during character creation, spending 50 Feat points in the religion section, talking to Mek-kamoses at Mek-kamoses's Spire, or by finding the

For the Set Priest and Archpriest, see the Priest page.

Set, the old serpent, is the god of the Stygians. Set worship originated with the serpent-people who were driven from the world by King Kull of Valusia, but he rose once again among the ancient races of the south. Players who wish to partake in the ritual sacrifice of hearts, to learn the secrets of snakes and summon a giant serpent as their Avatar should choose Set. Set is the arch-enemy of Mitra.

This religion uses various venomous poisons to create sacrifices for its God, Set.

Set's avatar is an enormous snake. It can climb some walls.