The snake-people were thought to be gone. First defeated in the war with first man at the dawn of time, then purged again by King Kull of Valusia.

But here, in this bizarre, mysterious piece of the world, they found succor with the Giant-kings. Perhaps the city in the volcano was ancient before even the Giant-kings lived in this land. But either way, the degenerate remnant remains.

These daggers are forged from blasphemous patterns obtained beneath the volcano from the last degenerate.

Repairing Serpent-man Daggers requires up to: 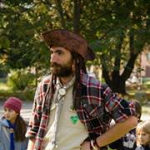