Sepermeru, City of the Relic Hunters

The majority of NPCs in this city have a neutral status toward the player, meaning they will not attack unless provoked. However, some NPCs, which are normally in small groups around the City, will automatically attack if the player gets too close. Neutral NPCs can become aggressive if attacked by the player or combat happens in their vicinity. All the neutral NPCs within the City won't turn hostile because of the actions of the player in only one part of the City. Neutral NPCs won't become aggressive if the player is simply seen dragging a captured NPC through the city. If a large portion of formerly neutral NPCs turn aggressive, they will not stay that way permanently and will revert to a neutral status after a certain length of time.

Conan is located at Waterside inside a tavern. He has dialogue about Razma and escaping the Exiled Lands.

Merchants are located in Waterside and Westwall that will sell the player various items in return for silver or gold coins.

Sepermeru, City of the Relic Hunters TeleportPlayer -246530 95930 -4282 is located in the western desert portion of the map, southwest of the nearest Obelisk. It is separated into 5 areas:

Estimation of the district areas: 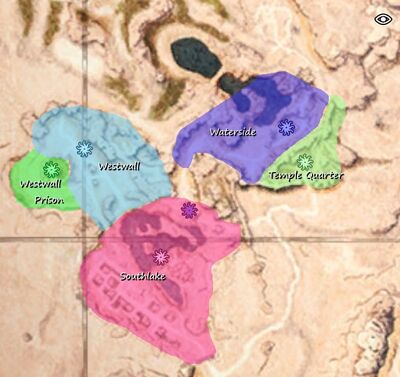 Notable NPCs over all single districts[]