This disambiguation page lists articles associated with the same title. If an internal link referred you here, you may wish to change the link to point directly to the intended article.

A Saddle is a craftable item that allows a Pet to become a Mount. 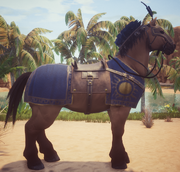 Saddles act as a type of armor for a Mount and will be placed in a separate armor slot in the mount's inventory. Various saddles will each have different effects on the mount's acceleration, speed, defense, and maneuverability. Currently only Horses and Rhinos (Isle of Siptah DLC only) have the ability to equip saddles and become mounts in Conan Exiles.

Six more Horse Saddles may be crafted as part of the Riders of Hyboria DLC:

Three more Horse Saddles may be crafted as part of the Architects of Argos DLC:

Five Rhinoceros Saddles may be crafted as part of the Isle of Siptah DLC: