Difference between revisions of "Modding"

The mod devkit is a work in progress and there are many rough edges still. (This also goes for the documentation!) Some things to be aware of:

We will be focusing on fixing these issues and generally improving the modding experience over the coming weeks. Thanks for your patience!

To create mods, get the devkit from the Epic Games Launcher, do your changes and build the mod to generate a mod file. You can either distribute the mod through the Steam Workshop by uploading it from the DevKit, or simply share the file with your friends directly.

The easiest way to install mods is to subscribe to them on the Steam Workshop. Once they are downloaded you can find them in the "Mods" menu from the Main Menu in game. You can also use mods that you get outside of the Steam Workshop - put the mod .pak file in "<SteamLibrary>\steamapps\common\Conan Exiles\ConanSandbox\Mods" and it will be available in the in-game mods menu.

Note: You have to restart the game before changes to the selected mod list has any effect. The ingame gui doesn't make this very clear right now.

Download and run the DevKit from the Epic Games Launcher, under the "Modding" tab. The DevKit is a modified version of the Unreal Engine editor and will let you do (almost) everything the developers can do except C++ code changes.

The first time you launch the DevKit it will open with a default mod selected. You can use this to play around and see how things work, but before you start working on something you want to use or distribute to other people you should create a new mod with a unique name. See the section "Dreamworld DevKit menu" --> "Create new mod" below for more details.

Note: The folders in "<devkit folder>/Games/ConanSandbox/Mods/" are used by the DevKit to edit the mod, so deleting a folder here means you can no longer edit that mod. These are the folders you want to have backups of!

To create new assets: New assets can only be added in "Content/Mods/<mod name>".

Use "Play in current viewport" to test with the mod content loaded.

When you have a mod you want to share with others, you must first Build the mod. Then you can either upload the mod to the Steam Workshop or share the generated .pak file directly with your friends.

3. Enter a name and click "Create". Once the editor has restarted you can begin creating the mod.

4. In the content folder go to Items/Weapons/Axe and open BP_Axe.

5. Select the 'StaticWeaponMesh' in the Components window.

6. Change the values of the Scale property of the Transform in the Details window.

Use 'Play in selected viewport'

9. Once you are done with your mod, go to the DevKit panel.

10. Enter the details and select a preview image. 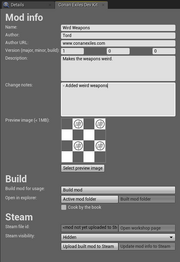 11. Build the mod with the 'Build mod' button. This process can take a while, so be patient.

12. Once the build is done, you can either click "Upload mod to Steam" or go to the 'Built mod folder' and share the 'YourModName.pak' file directly.

Upload the mod to Steam or share it directly
Retrieved from "https://conanexiles.fandom.com/wiki/Modding?oldid=10308"
Categories: