Edit
This creature/item/feature is part of the mod Emberlight and is only available if this mod is installed on a server or singleplayer world. 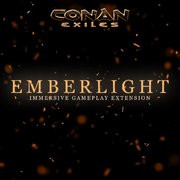 Emberlight is a mod for Conan Exiles. It adds new items to the game such as weapons, armor and placeables, and introduces new game mechanics such as the Vanity feature. It was first published on April 24th, 2018 and has subsequently been updated with additional content.

All Emberlight items have the word "Emberlight" in their item description, viewable in the Player Inventory screen.

Emberlight's core features include a number of new items and minor game changes.

Emberlight introduces the following changes to the base game:

Emberlight adds the following quality of life feats, which grant recipes of the same name:

The following items have been added to the game:

The Cuisine! feature allows players to see the food they place in special dishes and containers. To use Serving Dishes:

Additionally, Serving Kegs give hosts the ability to serve drinks to guests:

Bed Pillows have been added, which are identical to their decorative counterparts in the base game except that they allow players to bind to them as they would a bed. Bed pillows are functionally identical to Beds.

Emberlight adds 10 functional Town Signs which can be given editable text like a base game Wall Sign:

Several of Emberlight's core features can be modified or given additional functionality using the options in the Core features tab of the Mod Settings menu.

Admins can access the Core features settings via the radial menu of most Emberlight placeables, or by using the "/emberlight config" Pippi command.

The following settings are available:

Chroma allowed players to tint the colors of buildings in the game, using a custom interface.

To use the Chroma feature:

Additional options for players and admins are available in the Mixer Menu, which is also accessed via the radial menu of a Building Base.

A theme is a set of colors that apply to a single tier of a building. An example of a Theme is Carmine Sandstone.

Themes are part of one of three collections, depending on who created them and where they are stored: Basic Themes, Special Themes, and Local Themes (see below). Themes can be accessed and edited via the Mixer menu, which can be opened via the radial menu from any Building Base.

Players can apply multiple themes to a Building Base at once to save time:

Basic Themes are part of the Emberlight mod and are available to players by default. Admins can disallow players from having access to these themes. Chroma has the following Basic themes, with more planned to be added later:

Special Themes are part of the Emberlight mod and are not available to players by default. Admins can allow players access to these themes if they choose. Chroma has the following Special themes, with more planned to be added later:

Players can create new themes, as well as edit existing themes, in the Manage Themes page of the Mixer Menu (right).

In the Mixer Menu, Admins can use the Mod Settings page to configure Chroma for their server:

Changes to Base Game Farming[]

Emberlight makes the following modifications to growing and planting in the base game:

The crafting pipelines of both Horticulture and Animal Husbandry revolve around the use of the Ranch Water item. To obtain and use Ranch Water:

Homestead crafting stations use a timestamp-based system to determine their output, rather than relying on ticks. This results in almost no overhead for servers, but requires players to pay special attention when growing plants and caring for animals to ensure the growing and feeding processes are starting and stopping correctly. See the instructions below for more information.

The following Homestead settings can be configured:

Emberlight planters are similar to the base game Planter, in that they can be placed anywhere the player has space, and are used to grow plants. Planters (as well as Gardens) produce seeds in addition to their normal output, which is equivalent to the base game planters' values.

When Emberlight is installed on a server, special Herbalist NPCs have a chance to spawn anywhere an Alchemist NPC can spawn. If knocked unconscious and broken on a Wheel of Pain, they become Herbalist thralls. Herbalist thralls can be used in a Horticulturist's Bench to improve crafting and generate Ranch Water if the station's inventory also contains a Water Bucket.

The Wine Maker feat gives players access to the Arbor, which can grow Vines and Grapes. To learn the Wine Maker feat, find the Vintner's Journal by hunting Exile NPCs in the Exiled Lands. These are the basic humanoids who inhabit the Southern, early game portion of the Exiled Lands map. Opening the Vintner's Journal will provide you with the feat as well as grape seeds to grow in the Arbor.

Obtaining and using the Arbor:

Additionally, the Wine Maker feat gives players access to Trellises, Decorative Ivy and a Decorative Arbor. These items are entirely decorative and can be individually configured with different styles and colors:

Players using the Emberlight mod can craft coffee using materials and crafting stations found in the base game:

Emberlight has several types of decorative plants which can be crafted at the Horticulturist's Bench.

The following plants can have their style adjusted by interacting them:

The following plants have only a single style and cannot be interacted with:

Emberlight's Animal Husbandry feature and its associated items and systems let players domesticate animals that they capture in the wild. This gameplay centers on Animal Pens, which provide different resources based on the type of pen. All animal pens are hand crafted once players have the required Knowledge feat.

Silk worms can be discovered and domesticated to produce Gossamer, which is used to craft silk. To obtain and use a Silk Worm Habitat:

Emberlight introduces a number of new weapons to the game, using both new and existing movesets.

Primitive axes. These weapons were introduced early in Emberlight's development to fill the niche of primitive one-handed melee weapons which could be used at all levels of play.

Primitive axes. These weapons were introduced early in Emberlight's development to fill the niche of primitive two-handed melee weapons which could be used at all levels of play.

These weapons occupy both hands and use a custom moveset. Similar to base game Daggers, Emberlight's Katars provide mobility and apply the Bleeding status effect.

These weapons occupy both hands and use a custom moveset. They forgo a standard light attack chain, instead arming the wielder with an aggressive forward leap. Additionally, the offhand

ability is a shout which gives the player the Challenger buff. If struck while under the effect of Challenger, the player is granted Furious. Furious gives the player +2 to their Strength attribute per stack, and gains an additional stack each time they are struck.

Heavy, two-handed axes. These weapons are functionally identical to two-handed hammers. They were created and implemented early in the mod's development to fill the niche of two-handed bearded axes.

Emberlight's Infantry Spears use a custom moveset. They behave similarly to base game Javelins, but replace the javelin throwing attack with a typical 4-hit heavy attack combo.

free offhand, they use perform light and heavy 2-handed combos utilizing animations from the Katana and Two-Handed Sword movesets.

Emberlight's Legendary weapons are roughly equivalent to base game Legendary weapons in terms of their attributes (damage, durability, etc.). With some exceptions noted below, they can be found in the Legendary item chests guarded by world bosses in the Exiled Lands, and in Vaults on the Isle of Siptah.

Emberlight's Vanity features are accessed through the Vanity Table, Thrall Vanity Table and Vanity Hand Mirror items. These are available via the Vanity feat, and the items themselves can be crafted at an Artisan's Workbench.

Using the Vanity Table or Vanity Hand Mirror, players can adjust the following base game visuals of their character. These changes require the Apply Changes button to be clicked before they will take effect:

The following additional visuals can be adjusted. These changes are applied immediately:

NOTE: To preserve visual progression for combat thralls, only crafter thralls can be given cosmetic armor and clothing. Thralls that can be placed and given equipment cannot have their attire altered in this way.

to bring up Emberlight's Mod Settings menu, where <feature group> can be "core", "homestead", "chroma" or "vanity" to go directly to that feature group's page in the GUI. Entering no parameter will take you to the Core settings page.

The following assets are overwritten completely by Emberlight. This means that there will likely be a conflict with other mods which also overwrite them. Note that these conflicts are very rarely game-breaking, but they may cause mod features to work incorrectly, or not work at all.

These assets have been modified to allow certain customization options in the Vanity to work properly. NOTE: If these assets are overwritten by another mod, the stubble layer cannot be modified by the vanity and body oil cannot be applied.

Emberlight uses a shared E_Weapon_ComboType enum asset which the modding community keeps continually updated. NOTE: If a mod edits this asset but is not part of the circle of modders who share the updated version of this asset, it will cause weapons to behave strangely and could cause serious balance issues on your server.

Base Game Assets Modified Via Modcontroller[]

The following game assets are modified in such a way that they add to, rather than overwrite, base game assets. This makes them largely compatible with other mods.

NOTE: Emberlight uses the following data table ID ranges for its items, recipes, feats and other data rows. Where an 'X' is given, it means that the developers intend to utilize ID numbers generally in that range.

Community content is available under CC BY-NC-SA 3.0 unless otherwise noted.