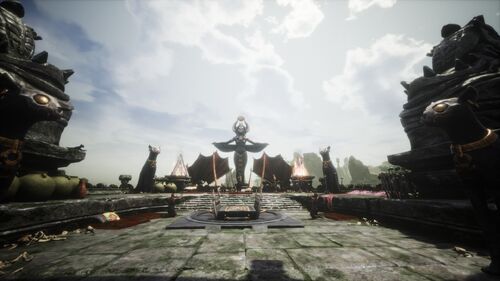 The Lemurian Faction hails from an ancient civilization, whose remains were scattered after the descent of Lemuria and Atlantis. They were first given land by, then tricked and enslaved by the Giant-Kings. But finally, under the leadership of their Witch Queen, the Lemurians eventually waged war against them. After betraying The Archivist and casting a spell at the Shattered Springs, which devoured an entire army of their foe, the Lemurians indirectly caused the downfall of the serpent man empire of Acherus, which felt provoked into conjuring up a deadly sandstorm. This sandstorm instead got trapped by a Lemurian Priest, Petruso the Sandstorm Maniac, causing it to stop short of the Jungle inhabitated by the Lemurians, and instead endlessly cycle through the kingdom of Acherus.

Not surprisingly, the Lemurians are almost exlusively consisting of the Lemurian race. They only have a single extended Camp, but two dungeons are also themed in lieu of their lore. Several runestones inscribed by The Witch Queen cover the eastern and northern map as well as parts of the snow area, describing their descent and eventual war against their enslavers.

These NPCs generally have 270 HP - named NPCs/T4 usually have 300 HP instead, which is an unusually small bump for named NPCs (30 instead of 75). They can be found at the Pagoda of Boundless Lusts. Lemurians are about as strong as the Black Hand, having a tiny bit more HP, but also slightly weaker weapons and armor. They are an excellent source of Lemurian Warrior Armor pieces.

Altho not a faction camp, the Forgotten City of Xel-ha is home to the seat of their power, Palace of the Witch Queen.

Their central faction hub and only camp Pagoda of Boundless Lusts is divided into:

Their health across converted Thralls Entertainers, Fighters and Archers goes as follows: 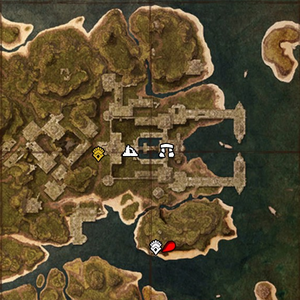 The following lore can be found in the Conan Exiles game: