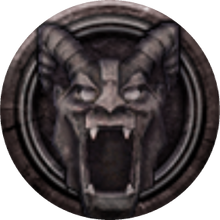 Jhebbal Sag is the sixth religion added in Conan Exiles.[1]

Uniquely, the religion and its recipes cannot be learned during character creation, but is instead learned inside its dedicated dungeon, the Midnight Grove, by defeating its boss and eating the

Flesh of Remembrance. Alternatively, named Jhebbal Sag priests can drop a different variant of the

Flesh of Remembrance - this being the only way to learn the religion on the Isle of Siptah.

A Follower of Jhebbal Sag can extract blood from their victims and craft lures to attract creatures. Once you reach the highest level of worship you can craft the Claws of Jhebbal Sag.[2]

For the Jhebbal Sag Priest and Archpriest, see the Priest page.

Jhebbal Sag is the Lord of the Beasts, as well as the god of animals, nature, and savagery. He rules over all animals and beasts, including men. Worshiping this god will assist in taming animals, making this process a lot easier.

All animals, including man, once worshipped Jhebbal Sag, Lord of Beasts, and spoke the same language. Now, most have forgotten, and only the largest, smartest, or strongest animals remember the earliest days.

Those who remember are bound together and can be controlled by one who serves Jhebbal Sag, or knows the language of animals.

In most cases, the only men to remember the ancient language of Jhebbal Sag are direct descendants of his loins. According to legend, there are groves throughout Pictland or the Black Kingdoms where the old Beast Lord sometimes still visits and takes his pleasure among the females of the animal kingdom. Sometimes he mates with a pantheress, doe, or a woman. And from these matings come a steady supply of exceptional creatures who are brothers in spirit as well as blood. By demonstrating the power of the Call of Jhebbal Sag, these priests prove themselves to be of the old god's blood.

A god of all beasts who lurk in the wild places, as well as men who act as beasts, fang and claw are the laws of Jhebbal Sag. The satisfaction of his primordial needs are his goals. For millions of years, he has loped through his wild lands in the form of one great beast or another; for such is his pleasure. When man came, he added them to his stable. From him they learned to rip and tear one another like beasts.

Jhebbal Sag is the leader of the animal gods (including Jullah the black gorilla-god and Jhil, the nighted god of ravens) and all of the other animal totems serve him.

Jhebbal Sag is worshipped almost universally in the Black Kingdoms, as well as among the tribes of the Pictish Wilderness.

Jhebbal Sag can manifest as one or several natural animals. He might also send one of the lesser animal gods (Jullah, Jhil, etc.) or their servitor creatures. It's said Jhebbal Sag always appears at night; there are tales from men and women who have seen his eyes burning like yellow coals in the darkness.

Priests of Jhebbal Sag are usually shamans or witch doctors of a tribe. They hear the whisper of their Beast-Lord on the wind, place meat onto his altars in sacrifice, and bring women to his sacred groves.

In addition to being able to summon and speak with the animals who serve the Lord of Beasts, the priests of Jhebbal Sag also learn the secret of the magical Symbol of Jhebbal Sag, an ancient, mystic sign which even the wildest animal is cowed before, and draws not near.[3]