Much of humanity's earliest exercises in cunning and ingenuity came from staring at the water and devising an easier way to catch fish. Traps and nets are woven from various, tough fibers, and aid in man's pursuit of tasty fish.

The Deep Sea Fisher Feat can be learned by interacting with the tablet on the right side of the room with a large fish carcass in The Sunken City.

The recipe can be learned from a random drop on Siptah. 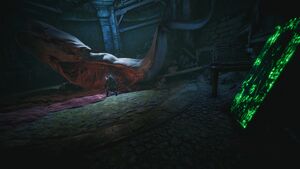