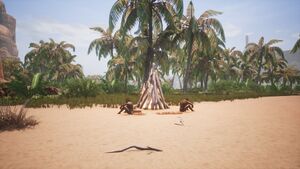 Exiles are isolated groups of people who escaped from Crucifixion and have huddled together for survival. They have various unnamed camps like Exiles Camp 21 along the southern river and a cave named Sinner's Refuge.
May contain Archer, Fighter I; Taskmaster I-III