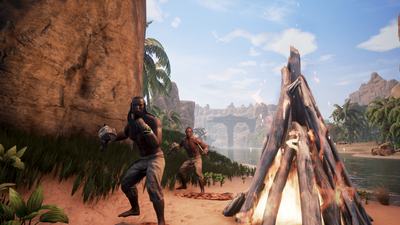 Not really a faction per se, the Exiles are small, isolated groups of people who escaped from Crucifixion and have huddled together for survival. Starving, desperate, wielding improvised weapons and wearing little to no armor, Exiles are the weakest human threat in the Exiled Lands. Some of them pray to Mitra and chose to stay in a life of austerity and privations. They patch together plant fibers or rudimentary wraps around their limbs and torso, and use crude weaponry made from stone and sticks.

Various T4 Fighter spawns along the southern river like: