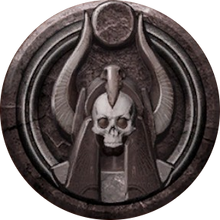 Derketo is a type of religion in Conan Exiles. It can be learned in the following ways: selecting it as the main religion during character creation, spending 50 Feat points in the religion section, talking to Yakira, Priestess of Derketo at the Pagoda of Boundless Lusts, or by finding a

For the Derketo Priest and Archpriest, see the Priest page.

1: You need the knowledge of the Pleasure Place feat but a Pleasure Dome to do it. Reported as a visual bug.
2: Crafted at Stove.

Derketo's avatar is a giant half-skeletal woman with purple skin.