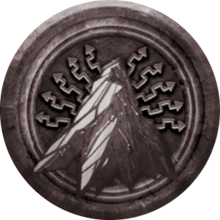 Crom is a type of religion in Conan Exiles. It can be learned selecting it as the main religion during character creation. Being the god who answers no prayers, Crom is an excellent choice for players who don't wish to participate in the religion system of Conan Exiles.

Crom gives a man courage at birth, and the will and might to kill his enemies. It is useless to call upon him, as he is a gloomy, savage god who hates weaklings. He is more likely to send forth dooms and death from his great mountain. Crom is a choice for players who do not wish to participate in the religion system in the game. He offers no advantage or avatar to call upon.

Crom offers no advantage or avatar to call upon.

Being the god who answers no prayers, Crom doesn't appear to have an avatar at this time, and probably won't in the future development.

Conan is a strong believer in Crom, but most of the time he doesn't pray to him except in small "desperate" occasions. Such is the way of a god of strength and that is what his followers must be like as well.