Conan Exiles is a survival game developed and published by Funcom, set in the brutal lands of Conan the Barbarian and based upon the writings of Robert E. Howard. The events in Conan Exiles take place on Conan's timeline between the stories Xuthal of the Dusk (The Slithering Shadow) and A Witch Shall be Born (following the Dark Storm chronology).[2]

In January 2016, Funcom announced it was working on Conan Exiles, an open-world survival game based on the Conan the Barbarian brand. The game released on Steam PC Early Access on January 31, 2017 and launched on the Xbox One as part of the Game Preview program in August. At the end of the month, Funcom teamed up with Koch Media/Deep Silver, which handles physical retail for all three platforms since the full release.[3] The game was finally released in physical retail on April 24, 2018[4] and digitally, for all platforms simultaneously, on May 8, 2018.

On April 27, 2018 Spike Chunsoft and H2 Interactive were revealed to release Conan Exiles digitally and in retail in Japan, Korea and several other territories in Asia. On August 23, 2018 Spike Chunsoft released a separate PlayStation 4 version in Japan titled Conan Outcasts (Japanese: コナン アウトキャスト).[5][6]

Interface and subtitles are supported for the following languages:[7]

Multi-player requires Xbox Live on Xbox and PlayStation Plus on PS4.

Taken from the Official Steam Store:

Official servers are maxed at 40 players to ensure server stability, where private servers may set it up to 70.

Conan Exiles was released on May 8, 2018 and is no longer available to pre-order. There are different pre-order incentives for digital and retail versions of the game.

The digital pre-orders, as well as existing owners of the Early Access or Game Preview version, will receive -upon redeeming a code- an in-game Conan's Royal Armor.

The Limited Collector's Edition depicted on the right, includes the following: 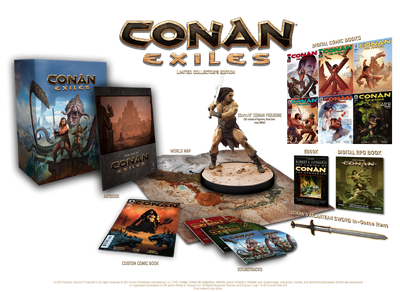 The Survival Guidebook is a physical book included in the Conan Outcasts release. It guides players on their journey in the Exiled Lands.

Conan Exiles Wiki is focused on creating the definitive guide to Conan Exiles. But while we make an effort to be complete, we are not an official game support channel.
Funcom does not provide classic MMORPG bug/issue-tracking. Instead, reports may be made through the forums and using several report forms.

Report issues through their respective page listed in the Issue section of useful links.

Originally, support tickets for all Funcom games, including Conan Exiles, went through the Support page on Funcom's website. However, this is no longer the case and it is now only used for issues with the company itself.

On Xbox, full nudity comes with the free Nudity DLC and is only available for the digital editions that are indicated in the store page and if you're in a region that allows for it. For physical copies, whether the full nudity option is available or not depends on the region of the purchased disk.[19]

On PS4, there is no Nudity DLC available; US regions disks only support partial nudity, whereas UK and Oceanic regions both support full nudity on PS4.
There is no region lock on PS4, so users are able to purchase disks from other countries and play them on their console, unlocking full nudity. Using a disk from a different region than the one your account is created in will restrict your access to the PSN store and you will not be able to purchase any DLC. However, the region specific disks install separately on your PS4, allowing you to play with full nudity on one disk and purchase DLC from the store on another disk.

The "Conan Exiles" tie-in sourcebook for Modiphius' 2d20 "Robert E. Howard's Conan: Adventures in an Age Undreamed Of" tabletop roleplaying game is a full-color 112 page hardcover illustrated with concept art and screenshots from Conan Exiles. It adapts adapts areas and gameplay from Conan Exiles and the community development system from "Mutant: Year Zero" to the Hyborian Age. The sourcebook was announced in a press release by Modiphius Entertainment on March 16, 2016.[43]

Listed in the left sidebar of the wiki under Conan Exiles Links. The listed discord is unofficial; it can be found under External links.