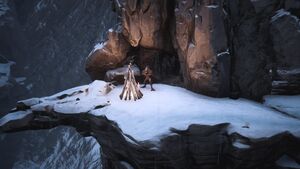 Bin-Yakin's Seal is the northernmost of four Child of Jhil caves in the Highlands biome, which include The Scraps, Jhil's Roost, and Lockstone Cave.

The entrance to Bin-Yakin's Seal is marked by a

Bonfire on a high ledge, north-east of The Great Dam, and is guarded by Child of Jhil demons. Access to the ledge is via the snow at the east edge of the Highlands. Alternative access is via a hole in the cave ceiling that can be found to the north-east, next to the world border.

There is a Large Chest outside the entrance along the cliff edge.

The cave is the home to several Child of Jhil demons, as well as the boss Feasts-On-Flesh, located in a small pit about halfway into the cave.

The boss creature Feasts-On-Flesh here randomly drops 1-2 of the following:

There is a Legendary Chest located in the chamber just east of Feasts-On-Flesh, with the skylight, sitting partway up the pillar.

Jhil the merciless, the nighted god and king of the ravens is worshiped in southern Stygia by the Dafari, Ghanatas, and their allied tribes. Jhil promises freedom for the strong and slavery for the weak. With this theology, the Ghanatas justify their slavery. Human sacrifice is strong in this religion. Those who praise Jhil are also known as the children of Jhil. Jhil, like Gullah (Jullah) the gorilla god, is a son and lesser god of Jhebbal Sag. [1] [2]