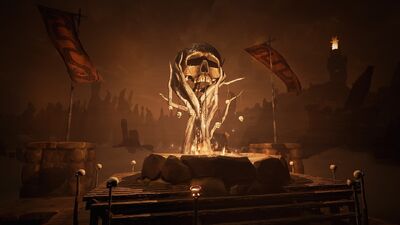 Altars are a type of building structure in Conan Exiles. They are part of the Religion system and provide unique items and abilities.

Knowledge granted by following the other gods will grant certain advantages. Depending on the chosen religion, an altar can be built as soon as possible, providing unique recipes.

Favor (Manifestation of Zeal) is gained in various ways, usually by crafting recipes with the religion's corresponding sacrifice. Each altar provides a special tool recipe that can be used to harvest human bodies after their defeat for said sacrifice.

Sliver of the Unfulfilled.
Jhebbal Sag - Use

Sacred Blood.
Mitra - Use the

Lingering Essence.
Set - Use the

Human Hearts.
Ymir - Use the

Ice Shards.
Yog - Use the

Unblemished Human Meat.
Zath - Use the

Each religion has three tiers of altars, and favor is required in order to upgrade them. Each tier unlocks additional Recipes, for items such as Weapons or Food.

With a tier III altar and an archpriest, it is possible to summon an Avatar of the corresponding god.[1]